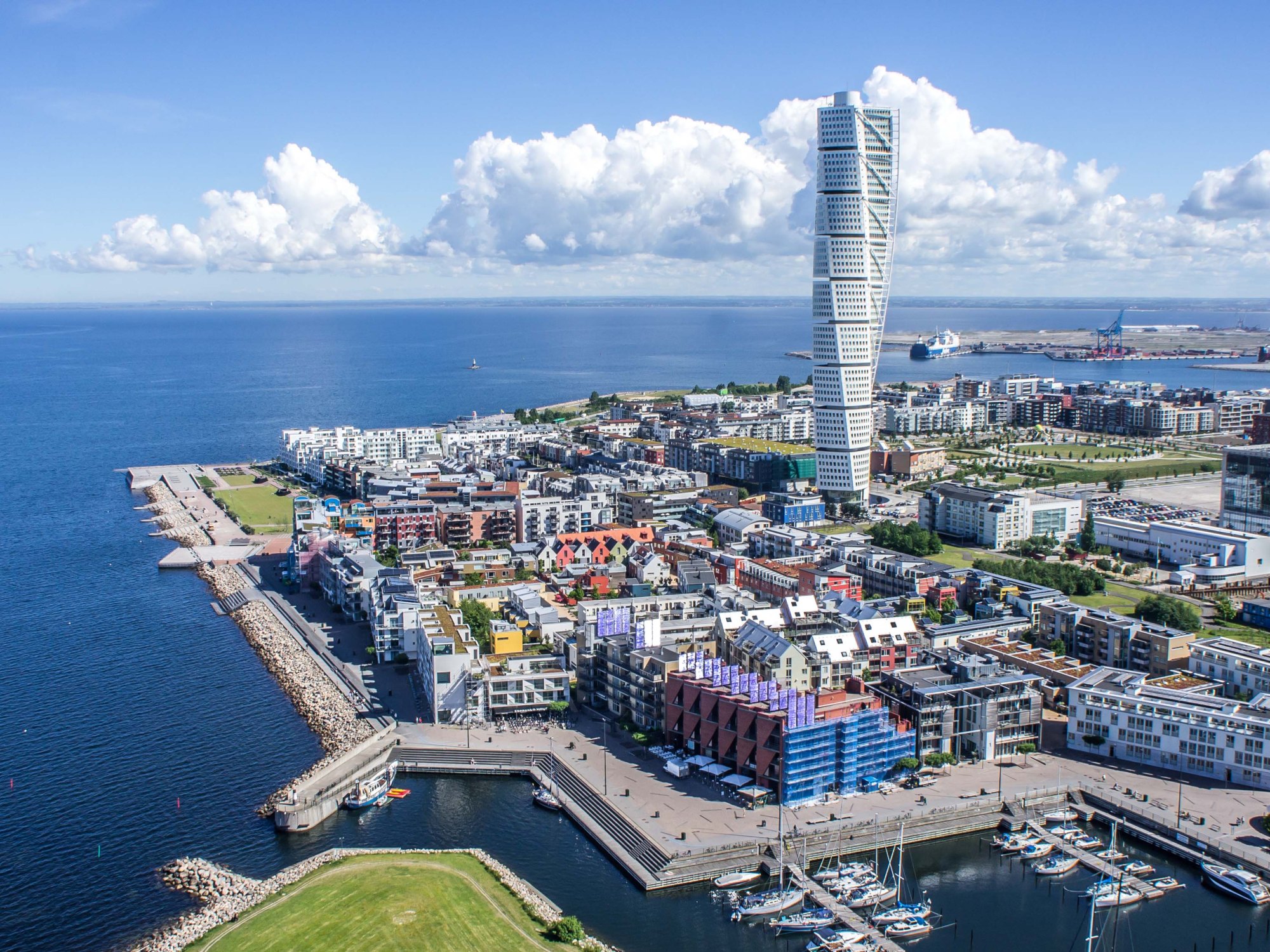 Malmö is an emblematic city, though few people outside of Sweden and Denmark know about the city. The rest of Europe (and Sweden) has a lot to learn from Malmö on many accounts. Myself I have never visited it, so you will have to take my published references for granted.

Two things about the most southern city of Sweden in this post:

1) Malmö City Council has developed its own 3D city model to become more self-reliant and efficient in its processing of geospatial data;

2) its latest comprehensive plan is worth watching by all planners in the world, because it is probably the coolest video ever made by a planning authority.

The official tourist website for the city claims that every four trips within the city is done by bicycle. I don’t know what the figures are for cities in the rest of Europe, but my colleague who is a cycling activist in Newcastle probably dreams of such figures for the North East of England, where cars rule almighty over most of the city.

Malmö is the third largest city in Sweden, 280k inhabitants, the seventh biggest city in Nordic countries (aka “Norden”, not Scandinavia). Greater Malmö has 700k inhabitants. On the 20 April 2016, the entry in English on Wikipedia featured the following recent statistics: ” Circa 43% of the population have a foreign background (135,509 residents); 31% was born abroad (99,788) and another 11% was Swedish-born (35,721), with foreign-born parents. The Middle East, Horn of Africa, former Yugoslavia and Denmark are the main sources of immigration” (Tack Wikipedia, and for more background info in English). The average age of Malmö residents is 36, as opposed to 41 for the national average, and 40 for the rest of the Skåne region — a rather young population.

It is also the capital of Skåne, where people speak in a funny way — that’s what the people from Stockholm will tell you anyway — judge for yourself.

Miso Eric, 3D Developer Engineer at Stadsbyggnadskontoret Malmö (the planning office for the city, see a modest web content on the English version of the website) has been very active in the creation of the 3D model of the city. Check out the video from 2013 in Swedish if you dare! Here is a link to some of the slides in Swedish, with lots of fancy pictures of the model. Below is a very short summary of the video.

The idea was to become independent from external providers, save costs, collect data as needed and more quickly than via procurement, and being able to control every step in the data collection and analysis processes. Miso Eric points out that procuring the modelisation process to consultants can take up to a year, which is too long for a growing city like Malmö.  The project started in 2005, and the model is now used mostly internally and integrated in workflows related with urban planning and design.

The approach was quite innovative for Sweden and drew attention from the whole country, particularly Stockholm and Göteborg, the two largest cities. The 3D model is based on photogrammetry with 25 cm precision/accuracy, and orthophotos, which are photographic maps. Aerial pictures over the whole of Malmö City are taken every year. They were able to automatise the transition from LOD 2 (buildings visualised as blocks) to LOD 3 (with accurate visualisation of roof surfaces). 80% of the time initially spent by drawing all roofs by hand could be achieved by drawing only the main roof lines to then automatise the rest of the surfaces.

After digital roof completion, the model is draped with pictometry maps.

The model is complete and can be used for all manner of planning work. An important application of the model is to support urban densification and upgrading of the large wave of housing built between 1964 and 1975 in Sweden, famously termed the Miljonprogrammet or “million homes”, which saw the construction of over one million homes over the whole country at a time of major housing shortage. The “million homes programme” is often associated with poor quality high-rise housing, although high rises were only a proportion of the total housing stock built at the time.

The model is also used for planning new areas such as the “sustainable neighbourhood” Hyllie, the new acclaimed southern entry point to the city.The page for the Hyllie area on the city’s official website  lauds the sustainable profile of the area, where one can read the following:

“The Hyllie town centre will become the most climate-friendly neighbourhood in the whole Öresund region. A green, low-energy neighbourhood with 100% renewable energies usage” (own translation)

A 3D model has been printed with the 3D printer bought by the municipality in 2011, a 3D- ZPrinter 650 purchased for 500 000 Swedish kronor. The scale of the printed model is 1:2000 is only 2,5 square meters. /*Note: Sweden is famous for keeping a lot of statistics about public expenses and even personal information open to the general public. */

A 3D model of the sustainable brownfield development Västra Hamnen has also been printed.

Comprehensive plan – the coolest promotion ever?

What drew my attention first was this cool video.

Whether or not the process was truly participatory is perhaps to be determined at a later date, but undeniably the video is catchy and makes it amenable by people from all walks of life (like young Malmö residents). Or is the intended effect to look fashionable to outside world, particularly the new generation of hip planners and architects???

Here is the online interactive map for the comprehensive plan, where all the relevant GIS layers can easily be turned on and off. This looks like open, accountable use of GIS at its best (although I haven’t looked for downloadable open GIS data layers just yet).

Here is the original PDF of the plan in Swedish.

Somehow you can sense that there must have been young (e.g. freshly graduated?) architects and planners involved in the comprehensive planning process. Or maybe older planners are making more efforts.

Additionally, the city of Malmö has been making considerable efforts in terms of  social sustainability: see the website in English, and a recent report in English assessing progress and continuing work. These efforts are a reflection of the challenges (and opportunities) which the city faces in terms of employment, integration and cultural diversity.